Twelve Tone is a collection of like minded people who love everything music.

Our staff and teachers come from a collection of backgrounds but all have one thing in common - music.  We all believe in the simple truth that music and community go hand in hand.

Having grown up in Switzerland, Rudy started playing music at the age of 8 years old. His passion for music gave him a broad interest for a number of different instruments, though he doesn't consider his formal education having begun until he made the move to Chicago in the fall of 2009 to attend Columbia College Chicago’s music program.

While studying he was able to hone his craft and focus his attentions on developing his understanding of the workings of music.After graduation he spent some time traveling the country with a Chicago based blues band before settling down as a teacher. With 6 years of teaching experience Rudy is always willing to stop and talk about new music or new gear! 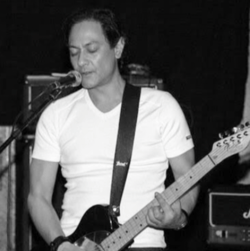 Van Lierop was born and raised in the Netherlands. He grew up in a household of musicians and got his first guitar at 5 years old; at age 15 Will started his musical journey. Joining several bands along the way, Will was a lead vocalist and guitarist gigging throughout the Netherlands for many years. He created his own rock band in his late 20s and learned how to play bass, drums, piano, and violin throughout his career. Will released two singles and composes his own music on a regular basis.

After performing for so long, he began a new musical path: sound engineering! He opened his own sound recording studio, deemed “Van Lierop Records,” and became a certified sound engineer. When he moved to Chicago in 2015, Will combined all of his musical knowledge into his performance work as a looping artist and recording live performances of bands. He performs currently around the North Shore of Chicago.

Originally from Indiana, Sandy moved to Chicago to pursue her musical career in 2010. She studied voice and piano at Columbia College Chicago, graduating with a Bachelor's degree in Vocal Performance. With backgrounds in musical theatre and classical voice training, she is well versed in multiple genres of music, including rock, jazz, and pop. She plays piano, ukulele, djembe, and a little bit of guitar. She's been a gigging musician around the local Chicago music scene since 2013 and is currently working on recording her third album! 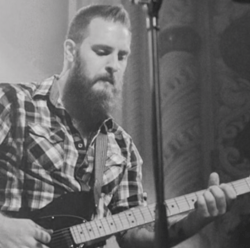 Dalton Howland is a multi-instrumentalist in Chicago who currently writes, arranges, records, produces, and scores original music for a number of bands and multimedia projects. As lead guitarist, backup vocalist, and songwriter in Chicago hard rock band Non Exotic, he has shared the stage with some of the genre’s biggest bands. Being a professional musician for 15 years, and having played guitar since 11, Dalton has acquired great skill in Blues, Rock n Roll, Jazz, Heavy Metal, and Latin music, and takes on any challenge he can. He has been passionate about music education for over ten years and has had many private students and successful musicians for lessons, guidance, and inspiration.

With the network of amazing musicians and other artists from attending Columbia College Chicago, Dalton continues to collaborate, perform, and explore music and the arts community of Chicago. 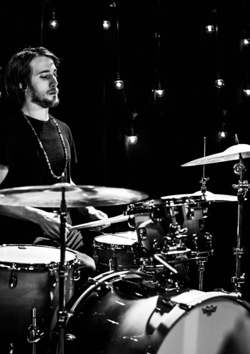 Julian Daniell is a professional Songwriter and Multi instrumentalist. Born in Colorado, Julian left to study music at Columbia College Chicago where he studied drum set for 5 years and developed his songwriting, guitar and singing skills as well. After college he continued his studies in Funk, Rock Jazz and Latin styles. Over the last decade he has worked with many different Chicago original acts and cover bands across many genres and also taught at several different schools of music. 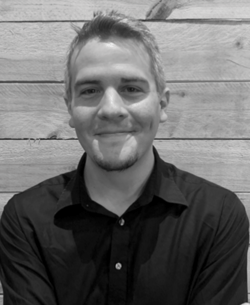 As an instructor, David values rudimental technique and groove versatility. He challenges students to apply themselves creatively in any given musical situation, and to be well equipped with a working knowledge of every possible genre of drumming—with a flair for funk, R&B, Afro-Cuban/Brazilian, jazz, fusion, and progressive rock. In addition to drum set, David also teaches concert, marching, and hand percussion. 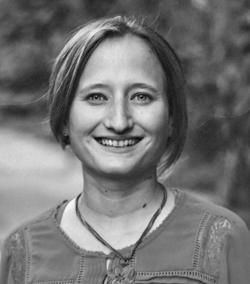 Gail is super passionate about helping kids unlock their creativity and curiosity in the learning process. When she's not teaching, Gail is an improv music director, composer, and performer.

She can be seen as one of the regular music directors for Storytown Improv- an improvised musical for kids, as well as playing for shows at Comedy Sportz and Laugh Out Loud. She is also the music director/ composer for the Skokie Park District's Still Acting Up, a theatre class for senior citizens.

Gail is also a singer songwriter and describes her genre as "Folk rock meets musical theatre." Her first single "Giverny" is now available on all streaming platforms.

Ethan Moll was born in Blacksburg, Virginia where he started singing as a passion and hobby before moving to Stillwater Oklahoma. In Sillwater, he participated in choir and began taking voice and guitar lessons. Popular music such as Rock, Funk, Blues, Country, Hip Hop, R&B, and Soul dominated his musical taste before college, which led him to later pursue music as a career. Ethan holds a Bachelor of Arts in vocal music from the University of Arkansas and a Masters in Jazz Performance and Pedagogy from the University of Missouri. While attending these universities, Ethan expanded his music pallet by studying and performing Jazz, Choral, Gospel and Opera. During his masters Ethan was privileged to study and perform with world-renowned artists such Christian McBride, Randy Brecker, Sean Jones, Jimmy Green, Greg Carol, Dave Dickey, and Meshell Ndegeochello during artist residencies.

Ethan now resides in Chicago, IL and is an active musician in the Chicago jazz scene as well as an educator. 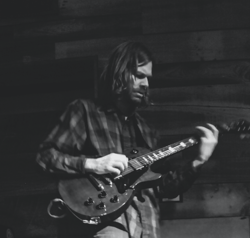 Jamie studied at Musician's Institute (Guitar Institute of Technology), in Hollywood, CA. Jamie has played and recorded as a sideman with many bands playing guitar, bass, piano, mandolin, banjo, and percussion working at West Lake Studios in Los Angeles.

Eventually Jamie joined Tomorrow's Cry and embarked on a nationwide tour. In 2009 Jamie moved to Chicago and played around town as a sideman playing guitar, bass, piano, and drums. Jamie is a member of the popular Chris Karabas Band playing guitar, keyboard, mandolin, and lap steel. In addition Jamie also plays with another popular band Owen And The Ghosts.

Jamie has over 12 years of experience teaching music to students of all ages and is one of the founding teachers at Twelve Tone Music school. 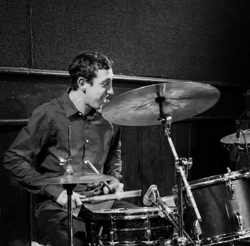 Nadav Simon is a multi-instrumentalist form Chicago. Nadav grew up in a musical family; His father, mother, and grandfather are all professional musicians. Nadav was exposed to a wide range of musical styles from a very young age. He began playing the drums in grade school, and he grew up singing in his local synagogue’s children’s choir, with enough chops to begin teaching music lessons and leading sing alongs in his early teens. He started playing in rock bands in the 4th grade and periodically participated in concert band and musical theater programs throughout his youth.

Nadav went on to study at the esteemed Roosevelt University Chicago College of Performing Arts, studying privately under eight-time Grammy award winning drummer, Paul Wertico. Nadav’s roots in jazz, rock, and jewish folk music has led him full circle. He has performed with many artists including Grammy winning harmonica player and pianist, Howard Leavy, Jewish rock icon Rick Recht, and world-fusion guitarist Rebbe Soul. Nadav has performed at the Chicago Jazz Festival, and the Jewish Folk Festival of Chicago, and has performed in cities through the midwest and southern United Stated, including Chicago, Detroit, Ann Arbor, New Orleans, Dallas, Louisville, and Cleveland. 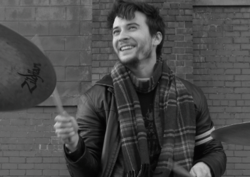 Luke was born and raised in Washington, D.C. and first picked up a pair of drumsticks at the age of 10. Luke earned his first drum kit piece-by-piece from his parents and teachers in exchange for good grades. Before long the kit was complete and by high school, Luke began playing in the Blues Alley Youth Orchestra and studying under renowned DC area drummer Steve Fidyk.

Luke went on to attend the University of North Texas majoring in Jazz Performance. Luke graduated from UNT in 2011 and moved to Chicago. Luke currently plays as a sideman for numerous bands as well as fronting original projects Spocket, and Kamikazee Vigilante. 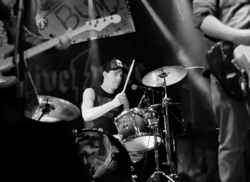 James has been teaching at Twelve Tone since Fall 2019, specializing in Voice, Guitar, Bass, Drums, Ukelele, and Piano. James attended Northern Illinois University where he received his Bachelors of Music, emphasis in Vocal Performance. Since 2013, James has been residing in Chicago, teaching lessons and playing with various groups. From multiple incarnations of his punk/funk solo group 'Winnie Page' to strange jazz combos and cutting edge hip hop projects, James stays nice and busy!

James has a well rounded-approach to teaching which keeps students engaged and moving forward. As a multi-instrumentalist, whether you want to study classical voice using the Bel Canto approach or learn to shred face-melting riffs on the electric guitar, James is the guy! 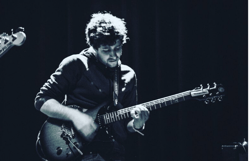 A multiplicity of talents keep this Ukrainian-born guitarist busy in the Windy City. Based in Chicago, IL, Konstantine performs and records in virtually every genre of popular music. He also composes and produces original music with the bands Spocket, KamiKazee Vigilante and Fury Hip Hop. When he's not on stage, teaching kids lessons, or in the studio, he's tinkering with guitars as a Technician at Third Coast Guitar Service.